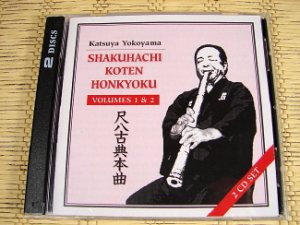 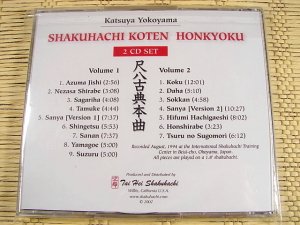 Contents of this 2 CD Honkyoku Set:

At the age of 25, Yokoyama began to study with Fukuda Rando, founder of the Azuma School and with Watazumido-doso, a legendary Fuke master who sought to synthesize shakuhachi music and spirituality within the context of Zen Buddhism. Guided by these two eminent masters, Yokoyama was able to combine the modernism of Rando with the deeply religious traditional spirit of Watazumido in his training. With this foundation, he came to develop a remarkably powerful and creative style that embodied both ends of the continuum. A true descendant of the Kinko tradition transmitted down through the generations, he also pioneered a revolution in modern music that swept across post-War Japan.

In 1960, Yokoyama completed his studies at the NHK Japanese Traditional Music Training Center and, one year later, formed Shakuhachi San-Jyuso-dan, a trio devoted to furthering new music for the instrument. In 1963, he founded the Nihon Ongaku Shudan (Japanese Music Group) and Shakuhachi Sanbon-kai (Group of Three Shakuhachi ) with Kinko master Aoki Reibo and Tozan master Hozan Yamamoto. This historic group helped to establish a new genre of music for shakuhachi trio.

Katsuya Yokoyama is currently head of the Chikushin-kai Shakuhachi Guild. He has been the recipient of many prestigious awards, amongst them the Geijutsu Sen-sho (Art Award) in 1971, the Geijutsu-sai Yushu-sho (Art Excellence Award) in 1972, the Geijutsu-sai Tai-sho (Art Festival Grand Prize) in 1973 given by the Agency for Cultural Affairs and the Ongaku no Tomo-sha Award in 1991.

In 2002, the Japanese government honored Katsuya Yokoyama for a lifetime of achievement by awarding him the esteemed Shiju Hosho (Purple Ribbon Medal) award.

←Back To Shakuhachi CD Page