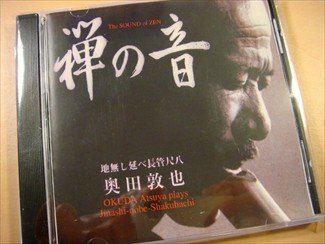 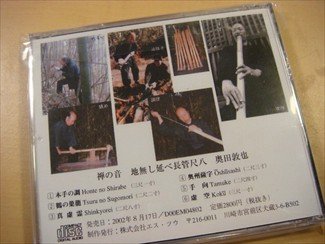 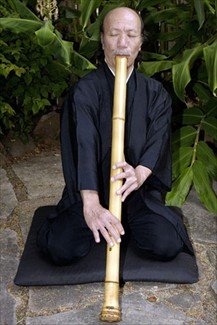 In 1985 Atsuya Okuda turned his back on a twenty year career playing jazz trumpet, and dedicated himself to teaching shakuhachi in Tokyo. Okuda subscribes to a purist, Zen-oriented approach to the instrument.

As shown in the sleeve photos on the CD, he cuts bamboo in the hills and crafts his own flutes, which remain as natural and unworked as possible – no lacquered bore, no inlaid mouthpiece. This type of shakuhachi is called hocchiku, and the sound is fragile and intimate, a world away from the full, projected sound of the concert hall performer.

In fact Okuda was apparently reluctant to make a recording at all, but we should be glad he has, for he is probably the finest player of his type since the death in 1992 of the Zen monk Watazumi (acclaimed by Steve Lacy as his favourite improviser in Wire 225).

Okuda’s sound may be quiet, but his playing has terrific subtlety and a patience of almost geological dimensions – if a rock in a Zen garden could play music, this is what it would sound like! His delicate phrasing on the ancient piece “Shin-kyorei” tinged with multiphonic chords, is a joy to hear. The concluding 17 minute version of “Koku” the ultimate hymn to Zen emptiness, is performed on a longer flute, and here Okuda reaches in deep, both in terms of pitch and spirituality.

←Back To Shakuhachi CD Page