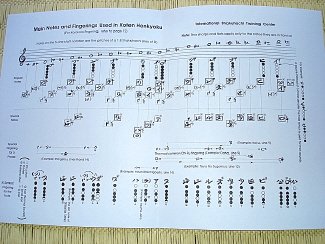 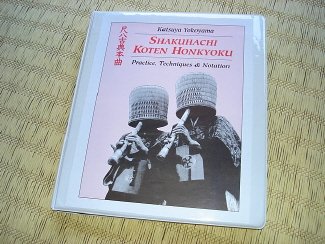 Are you ready to take your shakuhachi honkyoku practice to the next level? Here is a priceless collection of sheet music, CDs, and instruction by Katsuya Yokoyama.

This special edition of Shakuhachi Koten Honkyoku includes the following:

– 3 CD set, which includes each of the pieces in the accompanying collection of sheet music. All honkyoku pieces are performed by Katsuya Yokoyama on a 1.8 shakuhachi.

Yokoyama-sensei writes about this edition:

“The 1.8 shakuhachi is the most common length, making it the best reference for any self-learner. In truth, however, the spirit of each honkyoku is best expressed on its own length flute. This judgment is highly subjective, so we cannot prescribe a specific flute length for each song.”

“Due to the fact that honkyoku have been passed on by oral transmission, there are many songs with the same title but different melodies, as well as songs with different titles but the same melody. Remember that interpretation of the songs will differ completely from player to player during actual performance. It is important for those who use the scores to understand the characteristics of classical honkyoku. This collection of honkyoku has been published as one reference amongst many in order to give players an opportunity to deepen their understanding of classical shakuhachi honkyoku.”

At the age of 25, Yokoyama began to study with Fukuda Rando, founder of the Azuma School and with Watazumido-doso, a legendary Fuke master who sought to synthesize shakuhachi music and spirituality within the context of Zen Buddhism. Guided by these two eminent masters, Yokoyama was able to combine the modernism of Rando with the deeply religious traditional spirit of Watazumido in his training. With this foundation, he came to develop a remarkably powerful and creative style that embodied both ends of the continuum. A true descendant of the Kinko tradition transmitted down through the generations, he also pioneered a revolution in modern music that swept across post-War Japan.

In 1960, Yokoyama completed his studies at the NHK Japanese Traditional Music Training Center and, one year later, formed Shakuhachi San-Jyuso-dan, a trio devoted to furthering new music for the instrument. In 1963, he founded the Nihon Ongaku Shudan (Japanese Music Group) and Shakuhachi Sanbon-kai (Group of Three Shakuhachi ) with Kinko master Aoki Reibo and Tozan master Hozan Yamamoto. This historic group helped to establish a new genre of music for shakuhachi trio.

In 1967, Yokoyama was selected by the renowned composer Toru Takemitsu to perform the premiere of November Steps, his modern composition for shakuhachi, biwa and orchestra led by Seiji Ozawa and the New York Philharmonic. Since its opening over thirty five years ago, Yokoyama has performed this epic piece hundreds of times around the world.

Katsuya Yokoyama is currently head of the Chikushin-kai Shakuhachi Guild. He has been the recipient of many prestigious awards, amongst them the Geijutsu Sen-sho (Art Award) in 1971, the Geijutsu-sai Yushu-sho (Art Excellence Award) in 1972, the Geijutsu-sai Tai-sho (Art Festival Grand Prize) in 1973 given by the Agency for Cultural Affairs and the Ongaku no Tomo-sha Award in 1991.

In 1988, Yokoyama founded the Kokusai Shakuhachi Kenshu Center (International Training Center) located in Bisei-cho, Okayama, Japan where he hosted the first International Shakuhachi Festival in 1993. This event precipitated founding of the World Shakuhachi Society and Festival in Boulder, Colorado in 1998. At this gathering, five of the world’s greatest shakuhachi masters, including Yokoyama, performed in a single venue for the first time ever.


In 2002, the Japanese government honored Katsuya Yokoyama for a lifetime of achievement by awarding him the esteemed Shiju Hosho (Purple Ribbon Medal) award.