The Sound of Bamboo – Blowing Zen & the Spirit of Shakuhachi by Bob Berlin-Grous and Monty H. Levenson 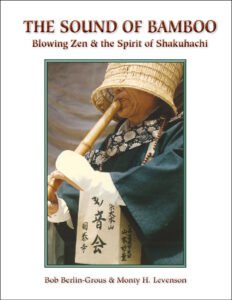 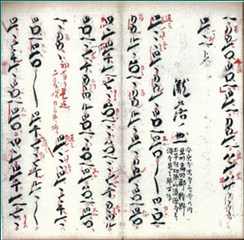 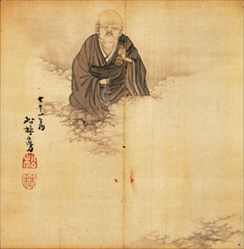 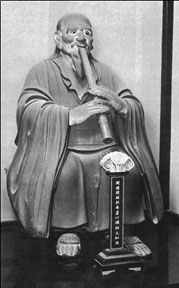 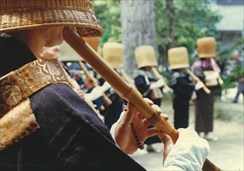 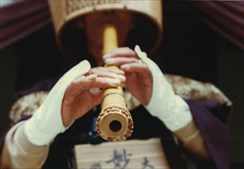 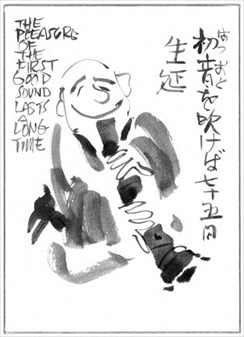 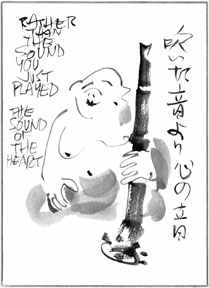 The Sound of Bamboo – Shakuhachi: Blowing Zen and the Spirit of Shakuhachi

– Includes over 100 photos, illustrations and artwork.
– An interactive book that connects directly to the internet via Ricoh’s new Clickable Paper technology, turning a print edition into the equivalent of a web browser with sound and video.
– Provides 400 hyperlinks connecting the reader from the printed page directly to the world of shakuhachi via the internet
– iOS and Android mobile apps are free to download and easy to use. One tap on a smart phone, aimed at an embedded page, opens the reader to the web via hyperlinks put into place by the author.

The Sound of Bamboo is not only the revised, expanded editions of two books in one, but something entirely new and different in how information is transmitted, imparted and otherwise conveyed.

This edition is made possible by the encouragement extended by Ricoh USA, Inc. and Ricoh Company Ltd. of Japan with support by the Graphic Communication Institute at Cal Poly State University in San Luis Obispo, California.

Ricoh’s collaboration with Tai Hei Shakuhachi on the project showcases their innovative interactive Clickable Paper technology – a new way of learning and communicating via print – that essentially turns a printed book into the equivalent of a web browser with video and sound. The Sound of Bamboo is one of only two books in the world written and published using this innovative new technology. It also testifies to Ricoh’s commitment and dedication to expand awareness of traditional Japanese culture worldwide thereby helping to perpeturate its rich and venerable heritage.

The free Clickable Paper app maximizes the reader’s experience in learning and better understanding concepts and processes by making print come alive and enhanced via multimedia content. It is based on the concept that people learn and understand in different ways. Some learn best by reading, some by videos, some by hearing, and some by a combination of these venues. Clickable Paper provides all of these experiences.

The Sound of Bamboo demonstrates Ricoh’s Clickable Paper as an Augmented Reality (AR) application that brings to life a “Japanese experience” through music, culture, learning, and training via web pages, videos and sound. A printed book or other form of print media can now be embedded with multiple hotspots linked to one of multiple sources, instantly taking readers from two-dimensional printed content to online, multi-channel content. iOS and Android mobile apps are free to download and easy to use. One tap on a smart phone, aimed at an embedded page, opens the reader to teh World Wide Web via hyperlinks put in place by the author.

The beauty of this new interactive technology goes beyond broadening the informational parameters of a printed book. It also allows an edition to be expanded and enhanced past the date of its initial publication. Like any online website, linked content can and will be updated or otherwise modified well into the future, keep a book relevant and up to date. And finally, it encourages interaction between readers, authors and others by opening channels of communication within a community of interest.

The Sound of Bamboo provides an expansive overview of the shakuhachi, a traditional Japanese bamboo flute dating back to the 12th century, and its close association with Zen Buddhism as a vehicle for meditation.

The first section of the book, Shakuhachi: A Journey of Discovery, was written by Bob Berlin-Grous over four decades ago, between 1974 and 1980, when he studied shakuhachi koden and koten honkyoku with the renowned teacher Sato Seibi, and Zen Buddhist philosophy with Abe Masao. Originally published in 2013, this revised edition has been greatly expanded, updated and edited by Monty Levenson in the new 2019 interactive edition.

Bob’s comprehensive work is far more than a personal narrative. It is a thoroughly researched treatise providing a complete overview of shakuhachi in its relationship to Japanese culture and foundation in Zen Buddhism. The initial part starts out with a description of the craft of the shakuhachi, exploring every aspect of how the instrument is traditionally made by craftsmen in Japan. Each step in the process is carefully documented. Selection and harvesting of madake bamboo in the grove is followed by information detailing all aspects of the traditional craft. Chapter 2 explores the Japanese sense of sound, describing the unique acoustical sensibilities deeply embedded in Japanese culture, language and physiology. Bob explains how the shakuhachi’s tonal variability and association with nature embodies nuanced ways of perceiving the world, making it a perfect vehicle for spiritual practice and aesthetic expression. A review of the historical evolution of the instrument and its traditional music is followed with a detailed analysis of shakuhachi honkyoku from both a Western analytical and Japanese perspective on music theory. The piece Hi Fu Mi Cho is analyzed phrase by phrase in order to shed light on the structure and tonal phrasing of honkyoku music. Other more contemporary forms of Japanese music such as Gaikyoku, Juita and Shinkyoku or New Music are also covered in this chapter. The final chapter presents an exhaustive discussion fo the religious foundations of the shakuhachi and honkyoku music and their assocation with Zen Buddhism in the hands of Komuso priests fo the Fuke tradition.

Included in the book are beautiful and inspiring Zen and shakuhachi themed Japanese sumi-e ink brush paintings by two renowned artists, Clifton Karhu and Taniguchi Ryudo Yoshinobu published for the very first time in this edition.

The final section, Stalking the Wild Bore, Monty Levenson expandsa and broadens his analysis of the acoustical physics of the shakuhachi, an effort to unravel the mystery of how breath is transformed into its remarkably resonant and nuanced sound.

Embedded in the pages of the book is a fourth section composed of hyperlinks that open a portal to the wide nad wonderful world of shakuhachi. Access to this deep repository of information is provided via interactive web links, audio music files and multimedia video content. The links introduce the reader to many of the foremost shakuhachi players and master teachers in Japan and around the world share their invaluable, diverse and uique perspectives, and to gracing us all with performances of their deeply moving music.

THE SOUND OF BAMBOO
Table of Contents
How to Use this Interactive Book
Hyperlinks
Foreward: Original 2013 Edition
Foreward: 2019 Ricoh Clickable Paper Edition
Artwork and Images

SHAKUHACHI: A JOURNEY OF DISCOVERY
by Bob Berlin-Grous
Sumi-e by Clifton Karhu
Preface
Prologue
Introduction: The Spirit of Bamboo
The Bamboo Cutter
The Sound of Bamboo

Chapter 2: The Culture – The Japanese Sense of Sound
The Significance of Sound in Japanese Culture

Chapter 3: The History – The Instrument and Its Music
The Fuke Legend
The Hitoyogiri

Chapter 5: The Religion – Blowing Zen
Zen Buddhism and Shakuhachi
Sound and Silence
The Music of Silence
The Meditative Qualities of Shakuhachi and Honkyoku
Meditation and the Music of Blowing Zen
– Asymmetry
– Simplicity
– Sublime Authority
– Naturalness
– Profound Subtlety
– Freedom from Attachment
– Tranquility
– Hearing and Listening
– The Importance of Breathing
– Sound and Breath
– Breath and Body Movement
– Religious Significance of the Fuke Legend

STALKING THE WILD BORE:
A TREK INTO THE HEART OF SHAKUHACHI DARKNESS
by Monty H. Levenson
Introduction
Evolution of Form
Changes in Structure and Design
The Future of Bamboo
From Emptiness to Sound
Intonation or Pitch
Timbre
Resonance
Harmonics
Now for the Boring Part
Strategies for Bore Design
New Priests of Emptiness and Nothingness
The Human Factor
New Technologies for Shakuhachi Making
Electronic Bore Measurer
THE SHAKULUTE – SHAKUHACHI HEADJOINT FOR THE SILVER FLUTE
Notes
About the Author
173 pages